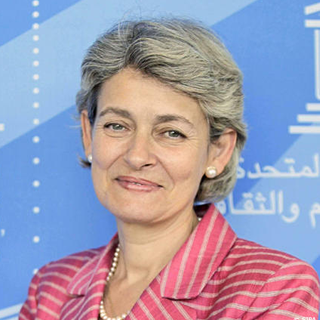 Irina Bokova has been the Director-General of UNESCO since 15 November 2009, and was successfully reelected for a second term in 2013. From Bulgaria, she is the first woman and the first Eastern European to lead the Organization.

As Director-General of UNESCO, Irina Bokova is actively engaged in international efforts to advance quality education for all as a fundamental human right and a transformational force for countering violent extremism and youth radicalization, achieving sustainable development and empowering girls and women. She has made gender equality her own priority for the Organization. A leading advocate in the fight against racism and anti-Semitism, Ms Bokova has spearheaded UNESCO’s activities on Holocaust remembrance and awareness and is the first Director-General to appoint a Special Envoy for Holocaust Education. Other fields of action include combating terrorist financing by preventing the illicit traffic of cultural goods, scientific cooperation and global advocacy for the safety of journalists and freedom of expression.

Having graduated from Moscow State Institute of International Relations, and studied at the University of Maryland (Washington) and the John F. Kennedy School of Government (Harvard University),
Ms Bokova has served as Bulgaria’s Secretary of State for European Integration, Minister of Foreign Affairs, Ambassador to France and Monaco and Permanent Delegate to UNESCO and Personal Representative of the President of the Republic of Bulgaria to the Organisation Internationale de la Francophonie, among other distinguished positions.

She has received state distinctions from countries across the world and is Doctor Honoris causa of leading universities.